Prev
0
Marc Márquez and Dani Pedrosa behave like Barcelona natives
13 June 2018
Next
0
Márquez and Pedrosa sneak into a photo
19 September 2018
MotoGP Championship
What do Marc Márquez, Ayrton Senna and Martina Navrátilová have in common?
11 July, 2018 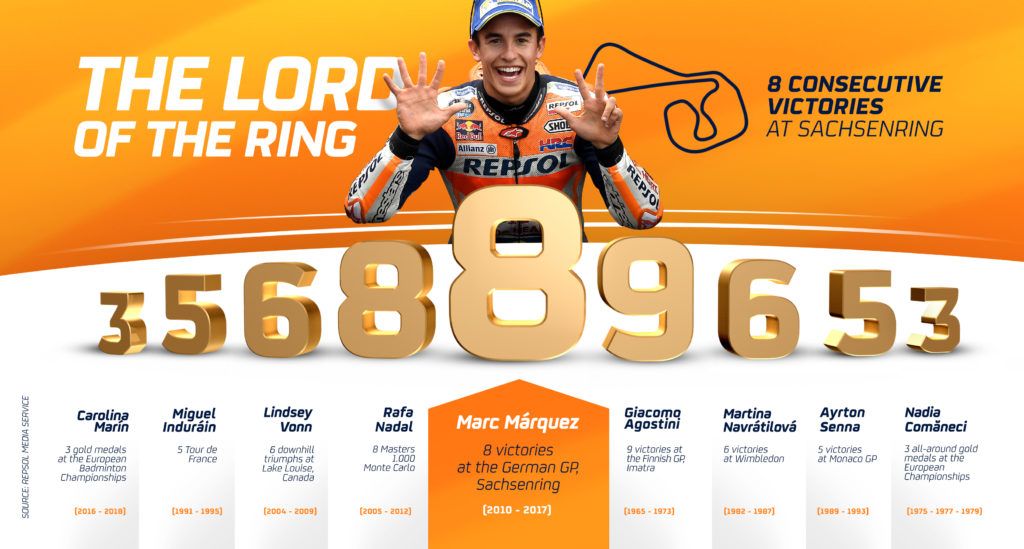 The Repsol Honda Team rider has been victorious for eight consecutive years in Germany, a milestone difficult to repeat in the world of sports.

The victory taken by Marc Márquez two weeks ago at Assen allow the Repsol Honda Team rider to come into the German Grand Prix in top form. The reigning MotoGP World Champion and current series leader has won on his last eight visits to Sachsenring, establishing a record that few athletes can match in their respective disciplines.

Márquez has bested his rivals in uninterrupted fashion at the German track since 2010: First in the 125cc class, then twice in Moto2 and, since 2013, in MotoGP. Not all sports have a calendar like motorcycle racing, in which the same venues are visited season after season, but some legends have managed to make certain locations a home from home.

Some such stars are tennis player Martina Navrátilová and her six Wimbledon wins between 1982 and 1987, or Rafa Nadal and the Montecarlo Masters 1000, where he has won eight consecutive times (between 2005 and 2012). Also in the Principality, Ayrton Senna forged part of his legend with five consecutive wins at the Monaco Grand Prix in Formula 1.

A saying in sport states that any the hardest thing is not reaching the top, but staying there. At just 25 years old, Marc Márquez has already put himself amongst some of the greats, and although he is not one to dwell on statistics, he is a regular record breaker. This weekend in Germany he will have before him the opportunity to continue surpassing milestones.