0
Torrot’s GasGas Rally Team, ready for a return to the Dakar
26 December 2017
Trial
Torrot presents the 2018 GasGas Trial Factory Team with the addition of Jaime Busto and Jeroni Fajardo
1 December, 2017 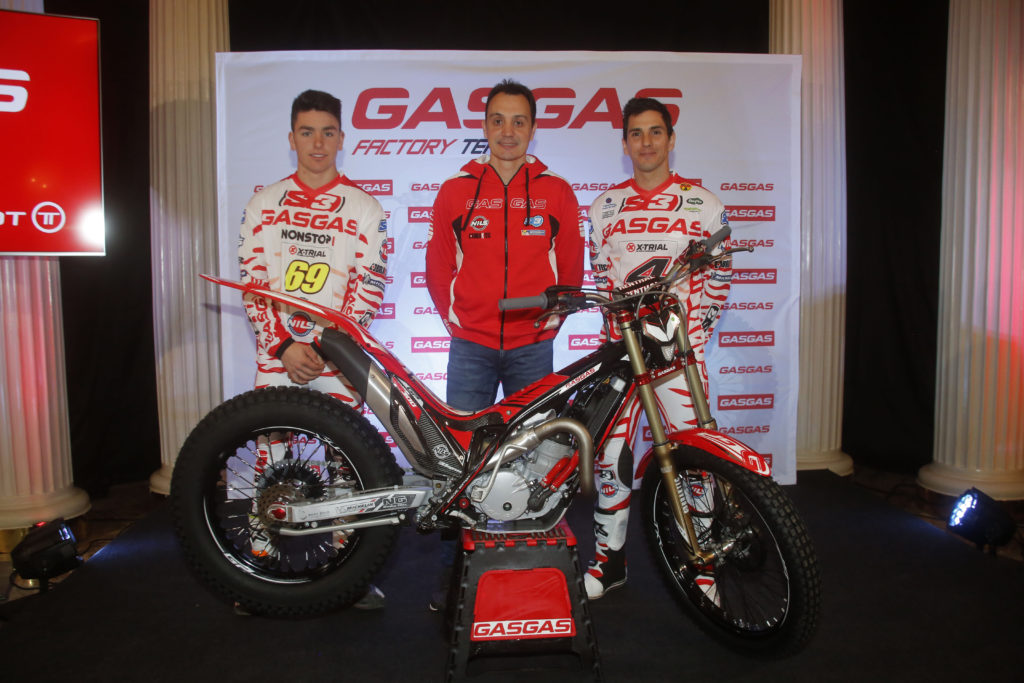 The two new GasGas signings will compete in an exciting and ambitious project under the direction of the four times World Champion, Marc Colomer.

Torrot, owner of GasGas, has revealed this midday in Bilbao its renewed and ambitious commitment for the 2018 season with the stellar signings of riders Jaime Busto and Jeroni Fajardo of GasGas Trial Factory Team. A structure once again led with the experience of Marc Colomer, who repeats at the front as team manager.

The four-time World Champion puts all his sporting knowledge back to the service of the GasGas Trial Factory Team. An official squad undergoing a profound transformation for the next season, in which it has committed to the talent of the young Jaime Busto and the experience of Jeroni Fajardo to take a big step forward in their aspirations in the fight for the X-Trial and TrialGP World Championships – formerly known as indoor and outdoor, respectively – and also in the Spanish Trial Championship, in the TR1 category.

Jaime Busto and Jeroni Fajardo will debut with the Torrot company sports team on Sunday 3rd in El Vendée (France), on the exclusive, competitive TrialGP 300 bike. Busto, a talented young rider from Górliz, 20 years old, will debut for the first time wearing the GasGas colours. Fajardo, the experienced rider from Girona, 32, return after a decade to compete with the brand that accompanied him at the beginning of his sports career in the trial discipline.

After the presentation of Torrot in Bilbao, an acknowledgement by the brand to the home town of the young rider Jaime Busto in his incorporation to the team, the GasGas Trial Factory Team will travel directly to France, where this weekend the 2018 X-Trial World Championship is starting. Vendée is to host the first date of the indoor World Cup that, on this occasion, has brought forward its start by almost a month, to December 3rd.

MARC COLOMER: “The addition of Jaime Busto and Jeroni Fajardo to the GasGas Trial Factory Team demonstrates the willingness of Torrot and GasGas to get back to the very top of the Trial World Championships, both indoor and outdoor. Jaime will turn 20 next week. He is a young rider with a very promising future. While Jeroni has great experience and has always been high up in the World Championship. Together they form a very complete team. The goal of GasGas is to come back to being World Champions as soon as possible. We know that at present it is a difficult challenge, since Toni Bou has been the great dominator of this speciality during the last seasons. We are aware of the difficulty that this entails, but that is also the motivation that pushes us to improve to fight for victory.”

JAIME BUSTO: “I am very happy and motivated to face this season with the GasGas team thanks to the opportunity that Torrot has given me. This is a new challenge for me. I will have a new bike, which I had always wanted to ride, and to which I have adapted to very well. Also to a new team, with a very good atmosphere. I really want to start the World Championship; the feeling of the GasGas TrialGP bike is very good and the team is very happy with this new project. We will give everything to get as high as possible, first in the X-Trial World Championship and, in May, in the TrialGP World Championship.”

JERONI FAJARDO: “I am very motivated with the start of this season. We are launching a new bike and a new team and my goal is to take a step forward in the X-Trial and TrialGP World Championships. This is a change that will allow me to improve a lot during the next two seasons. The GasGas TrialGP is a fantastic bike and we have a great team, so I hope to be able to fight for podium positions in the X-Trial and TrialGP World Championships. I want to thank Torrot for betting on me to be a GasGas Trial Factory Team rider.”