The Repsol Honda rider is an example of successful precocity in the sport. 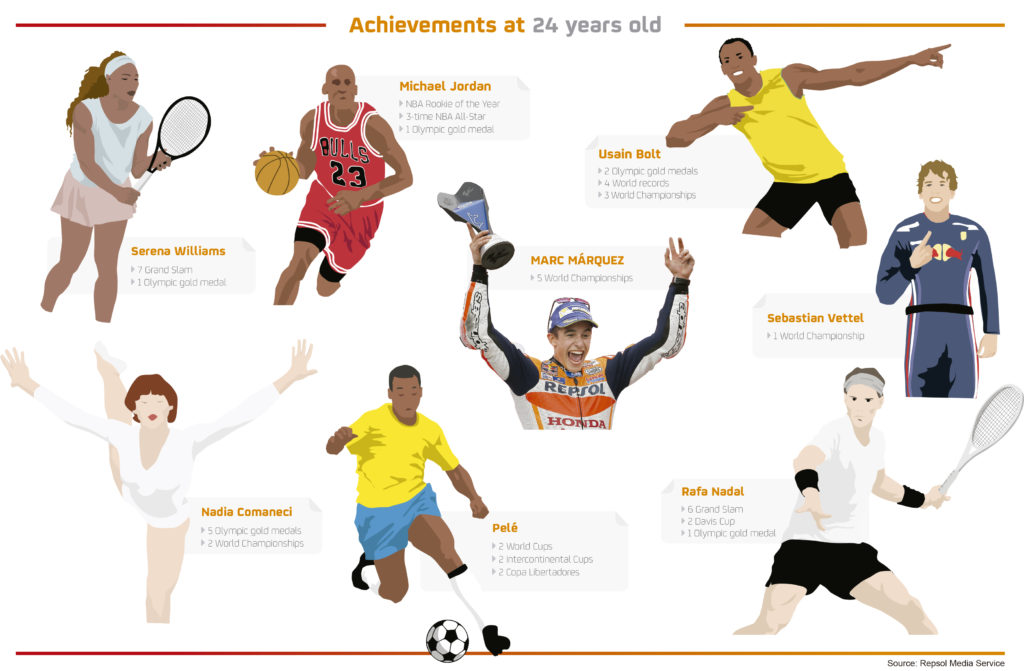 Marc Márquez celebrates his 24th birthday today. He does so where he most likes to be, along with his team at a racetrack. Yesterday, on the second day of official practice at Phillip Island (Australia), he put in 107 laps, more than any other rider. Today, on the last day of the second test of the 2017 preseason, he completed 96. For all his talent, he remains determined to put in effort, dedication and hard work.

In a sport in which the fastest rider wins, sometimes it is useful to take a step back and look at the fastest in another sense. What had other great athletes done at the age of 24? How many titles did Michael Jordan have? Or Rafa Nadal? It is not a question of comparing, because each of these athletes is unique, and no two disciplines are alike. Neither is a team sport comparable to an individual one. However, it is still interesting to see what Márquez has achieved at such a young age.

Big names in sport stand out, such as Michael Phelps, Rafa Nadal and current tennis no.1 Serena Williams. The 5 gold medals for gymnast Nadia Comaneci at the Olympic Games in Montreal in 1976 and Moscow in 1980 –aged 14 and 18 years old–, also make her one of the most successful early achievers in history. Others, such as Fernando Alonso and Michael Schumacher, had to wait until they were 25 to win a big title and launch themselves as stars. Michael Jordan, another sporting great who also celebrates his birthday on February 17th, was an Olympic gold medalist in Los Angeles in 1984, while Usain Bolt had already taken 2 golds and beaten 4 World Records.

Marc Márquez does not like to be told that he is a legend; he has so many years of racing ahead of him. Today he has been working onboard his bike and done what he does best: Preparing for his tenth season in the MotoGP World Championship –his fifth in MotoGP– aged just 24 years old. Happy birthday!