The wait is over. This Saturday, January 7th, Las Vegas will host the Visa Vegas eRace, the simracing event with the biggest prize pot in history: $1million. The Top 10 ranked drivers after the previous online competition, Road to Vegas, organized by Formula E and Cloud Sport, will face the 20 Formula E drivers in a unique virtual race.

After the four Road to Vegas online rounds held between October and December, ten simracers booked their ticket for the the Visa Vegas eRace. Drivers like Graham Carroll, Olli Pahkala and Greger Huttu will now battle against the Formula E drivers for a prize fund never before seen in simracing.

The Visa Vegas eRace, organised by Formula E and Cloud Sport, will be held at a brand new circuit in the streets of Las Vegas. Cloud Sport have exclusively developed the software and a virtual circuit that matches the most emblematic sights of the state capital of Nevada. In addition to the track, Cloud Sport have also designed the cars –all completely equal- from scratch.

Cloud Sport have created more than 30 eRace-specific software plugins that, together with the official marshals, will allow for thorough control of the race. There will be a race control centre where the stewards will regulate the race, even going so far as to punish the drivers delivering live penalties if they break the rules.

During the competition, all drivers will have single-seaters with the same technical specifications and the same setup. As in the ePrix, the three drivers with the most votes in the FanBoost will get extra power during the virtual race.

This is the first international competition for Cloud Sport in 2017. After previous experiences such as the SEAT Leon Eurocup online, organised together with SEAT Sport, the company are already preparing new challenges for this year. With the Visa Vegas eRace, the Spanish software developer continues with a heavy commitment to officially regulated competitions, bringing the virtual and real experience closer together in a direct competition between drivers and simracers.

Luis Pachón, Cloud Sport CEO: “Competitions like Road to Vegas, the Visa Vegas eRace and the SEAT León Eurocup online allow for a professionalisation of simracing never before seen. The Visa Vegas eRace is a first step to consolidating the world of simracing. These virtual competitions help solidify our position and take new steps with regards to the current eSports.”

The Visa Vegas eRace takes place on January 7th at 16:05h (GMT -8) and can be followed live through the official website of the Formula E. 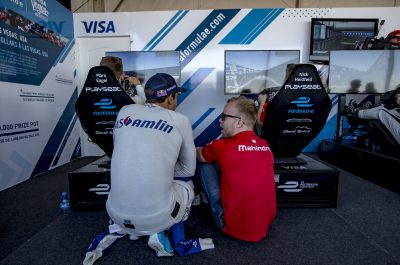 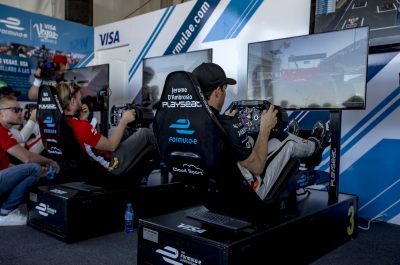