0
Márquez and Pedrosa prepare for a ‘photo finish’ second half to the season
04 July 2017
Motor
Al Kamel Systems: Technology Provider for the 24 Hours of Le Mans
15 June, 2017

The company will take part in the historic French race for the seventh time, managing the timing, graphics for television, communications networks and other services.

The 24 Hours of Le Mans is one of the most historic competitions in the world of motorsport, and celebrates its 85th edition this Saturday, June 17th. It forms part of the Motorsport Triple Crown, along with the Formula 1 Monaco Grand Prix and the Indianapolis 500; to date on Graham Hill has managed to win all three events, (the 24 Hours of Le Mans in 1972).  Spanish technology company Al Kamel Systems became part of the race in 2011, and this weekend are the total providers for the event for the seventh consecutive year.

The Barcelona-based company plays a central role in the correct running of the 24 Hours of Le Mans. They provide services to teams, broadcasters and Race Direction, among others, according to their needs. From basic and essential aspects such as timing, communications networks and graphics for televisions, to more technical elements such as systems to control the balance of car performance or noise levels. Up to eight screens of information relating to the standings, sectors, weather and positioning are offered. Another role of Al Kamel Systems is to assist Race Direction with cameras that detect when cars exceed the limits of the circuit. 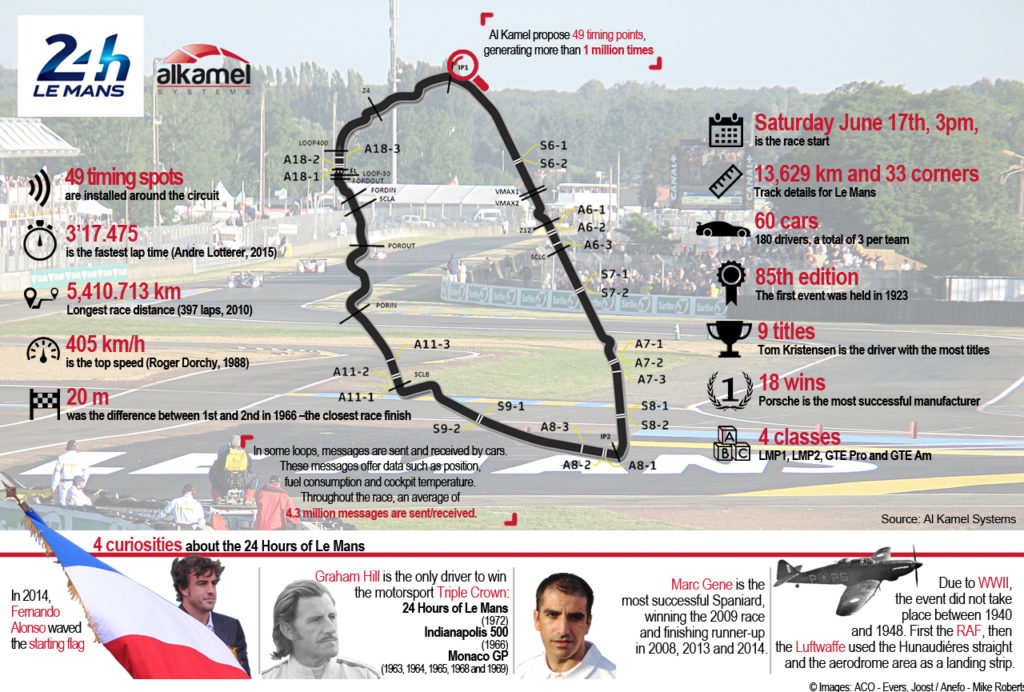 As shown in the infographics, up to 49 control points, also known as loops, are overseen. These serve to monitor speed and sectors, besides giving additional information to the organisers and teams. In many loops, messages are broadcast and received from cars, with an average of more than 4.3 million messages sent throughout the weekend. These messages provide information such as standings, fuel consumption and cockpit temperature.

This gamut of services would not be possible without a team of up to 20 people, who carry out work for over three weeks in the French town, installing more than 2,500 metres of cable and 3,000kg of material.

Thursday sees the battle for pole position and the race begins on Saturday, starting at 15:00 CET. With two days left before the race gets underway at the Sarthe Circuit, the only question that remains is who will win the 24 Hours of Le Mans?